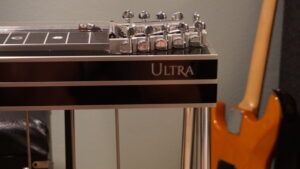 Here’s a nice, usable, bluesy sounding lick on E9 that can work over the basic changes to a blues or any place you want to just sound a little bluesy.
It’s based around notes from the blues scale and is played one half step above the open major chord position for the key of the song, so in this example the song is in Bb, which is found at the 6th fret and the lick is one fret above on the 7th fret.
With the E notes lowered a half step with your knee lever and the B pedal providing the bend, your ear will tell you how to phrase it to fit with whatever is going on with the rest of the band.
In the example, I’m playing the lick over all three chords in the progression just to show how it can fit in a chord progression. Probably a bit much, but good for an example of how it works.
Try little pieces of this lick in your usual back up work and see how it works for you. The bend is different from any of the usual E9 sounds and gives a different perspective to your comping.