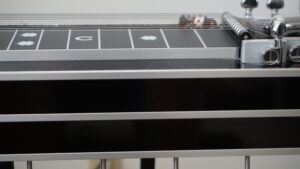 The E9th tuning that we know today offers many possibilities for harmonies based on the simple Major and minor chord changes found in most Country tunes. For more complex harmonies many players reach for the C6th, or, if they play an S-12 Uni, the changes that this setup offers. This usually means 6 to 9 pedals, 5 knee levers, and 12 strings.
My interest in simplifying this approach started when I found that most of even the complex jazz changes I was trying to play were available on the E9th with a few changes to the pedal and knee lever configurations.
I started with the open position Major triad and quickly found that the 6th tone which a player would normally grab by using the A pedal on the 5th ring was much easier to use if the 2nd string were tuned to C# instead of Eb.
My next step was to work on the B6 chord that I got by engaging the E to Eb knee lever. The first thing that I noticed was that my 2nd string, now tuned to C#, had become the 2nd (or 9th) tone of my B6 chord. The same thing as Buddy Emmons’ 10 string C6th top string. The next move was to add an additional lower to that change and lower the 9th string D to C#.
Now I had a complete B6add9 chord on all 10 strings.
Diminished chords are still covered with the F knee lever.
An additional minor chord position is available with the D pedal.
There are some fun quartal (fourths-based) chords available in this tuning but that’s another chapter.
The last thought about this setup is how the pedal arrangement allows more uses of pedal pairs. I learned the E9 using the Jimmy Day setup, which reverses the A and B pedal. I also had no real use for the traditional C pedal. I found it causes a lot of cabinet drop and tuning problems on some guitars and I never really needed it. (My apologies to Ralph Mooney fans). In it’s place I lower the 5th and 10th strings and the pedal now get lots of use paired with the pedals on either side of it. 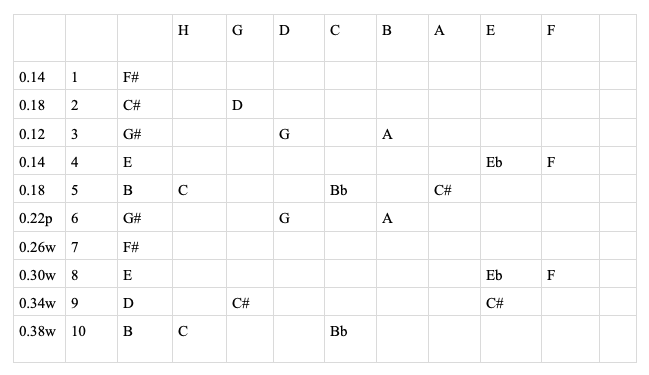