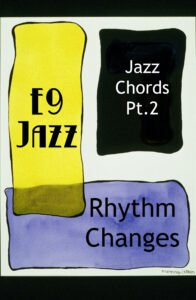 One of the most popular chord sequences in our musical world is the progression to George Gershwin’s “I Got Rhythm”.
Charlie Parker and dozens of other BeBop specialists composed and recorded dozens of variations to this chord progression and we should all know it and be able to play over it and improvise with it.
The first step is understanding the chord sequence and what it does. We’re in the key of Bb, which may seem foreign to many steel players, but is very common in jazz tunes. The first chord is the root, or I chord, which is any variation on the Bb, usually a Bb6 or Bb Major 7. The second chord is the VI chord, G7, which can be a dominant seventh or a minor depending on the whim of the composer or improviser. You can usually cheat your way through this change by just raising the root note Bb from your first chord to a B natural. The next sequence is Cm7/F7 followed by a descending pair of ii minor/V7 chords that end up back at Bb. In this case it’s Dm7/G7 and Cm7/F7.
Now we need to get to some form of Eb, the IV chord, so we use it’s iim7/V7 sequence, Fm7/Bb7/E6/ Edim, to get to the Eb and then raise the Eb note to an E natural to take us back to Bb.. All of this is just an elaboration on a repeating Bb/F7 sequence. The little jazz substitutions give it movement and some interesting chords to improvise over.
This is just a basic description of what’s going on with this chord sequence. Listen to the track and look over the chord forms and try your own variations, then find a fake book and look at the way jazz arrangers have navigated this sequence.
One of my favorites is “Oleo” which was covered by Buddy Emmons on his Steel Guitar Jazz album in 1963 as well as by many great sax players, including the song’s composer, Sonny Rollins. Remember, these chords and their variants are all available on the E9 using forms like these. Experiment and remember, if it sounds good to you, it is good!!