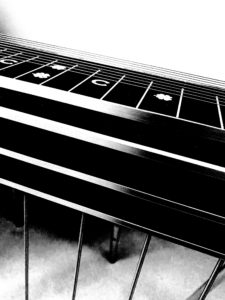 Here is a very common jazz chord progression and some E9 chord voicings to go with it. They are simple three note chords you can use in a variety of circumstances.
It starts with a ii minor chord (Am7) to V dominant seven (D7) going home to the tonic chord (G6 )
This module is every where in jazz tunes and very common in pop and even country progressions.
The last three bars are a ii/V7/I progression in a minor key, here, Em. The first chord, a half-diminished chord, is often the subject of confusion and bears some explaining. An easy way to explain a half-diminished (AKA minor 7 flat five) chord is that it is, in this case, an A minor chord (the IV chord of Em) with an F# bass note, it voice-leads to a B7 and home to the Em.
There are other places to play these chords, some of which you may have discovered on your own, but I find these easy to memorize and I like the way they sound on the lower strings. You can choose to play them as block chords or arpeggiate them, as I have in the example, for clarity.