I first read about the Number System in Jerry Coker’s 1964 book “Improvising Jazz”. I found it a great musical shorthand method to chart out a tune so that I could play it in any key quickly.
At the time I got a lot of work as a sideman in local bands, usually for short periods of time or even one night performances.
I kept a notebook that I could carry around in my pack seat and open on the floor next to me for reference. I charted the chord changes with the Number System in my own shorthand style and it got me through a lot of challenging gigs that might have been a problem with no clues regarding the changes to unfamiliar songs.
So, how does it work?
The chords are written, typically, using Roman Numerals referencing the chord positions in the major scale of the key the song is in. Major or minor are indicated by upper or lower case numbers.
Let’s use the key of C.
The root chord is I.
It could be a simple triad or an extended chord designated by a number behind the symbol, like IMaj7 for C Major seventh.
Here’s the chords to the C Major scale in the Number system, the slashes represent one bar per symbol.

The first move is to learn the chord positions using your A and B pedals and the E and F knee levers, and then relate them to the numbers. These are the most common positions and easy to remember under pressure. This chord scale can work for many different songs and styles.

The next move is to take a common chord progression and play it all at one fret position. Here we are using the open C chord position at the 8th fret and the closed position at the 3rd fret with the pedals down. This economy of movement makes the E9th tuning friendly to many common chord changes. 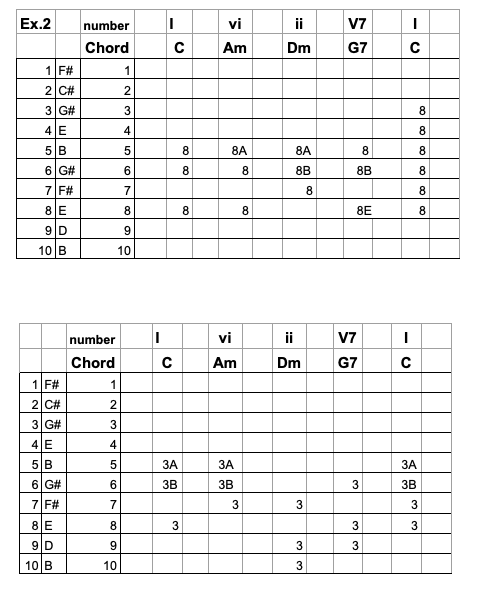