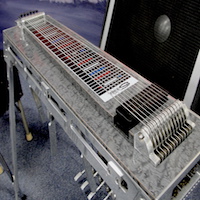 I've seen a lot of interest  from accomplished guitar players about switching to pedal steel or adding the instrument to their arsenal. So, without adding too much complication, here's the short course.

The most common pedal steel that will get the job done is a 10 string single neck tuned to the Nashville E9 tuning with three floor pedals and at least two knee levers. The instrument should be played with 2 finger picks and a thumb pick to get the sounds you want and you should use a big round steel tone bar, like the Dunlop 920. This is what everyone uses and is really the only way to sound like you want to sound. You will also need a quality foot volume pedal (check out Goodrich Sound) and a fairly powerful solid state amp with reverb. I know! you love your tube amp, but the distortion from tubes is not desirable for pedal steel and you need a lot of clean power to sustain your sound and cut through the band. Pro quality steel amps have from 100 to 400 watts and a 15" or sometimes a single 12" speaker.

OK, so how does it work?  The core of the tuning is E Major triads. there are four of them across the strings with four other diatonic strings mixed in. The two main pedals are called B and A and they each, respectively, pull the third tones to a fourth and the fifth tones to a sixth,giving an A chord when they are pushed down together.Voila! the most common chord change in Country, Blues and Folk music. The two common knee levers raise and lower the root tone E strings and give several different chord additions and inversions. The diatonic strings allow cool little chordal embellishments without having to move the bar around. Those are the basics. There's a lot more to say about the theory of chords and how they move by using the bar and pedals. We'll get to that in future posts. Coming soon will be thoughts on Tuning, Right Hand Technique, Controlling the Bar, Fitting in With a Band, and lots more about equipment and setup. Stay Tuned!